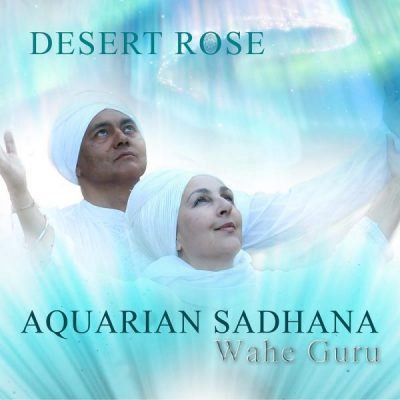 The Aquarian Sadhana, a collection of powerful ancient mantras from the Sikh tradition is musically interpreted by Desert Rose in an uplifting, groundbreaking and trans-formative world music style, taking listeners into a place of healing and bliss.

The Aquarian Sadhana tracks and meanings

Wah Yantee Kar Yantee, Jag Dut Patee, Aadak It Waha, Brahmadeh Traysha Guru, It Wahe Guru
“Great Macroself, Creative Self, All that is creative through time. All that is the Great One. Three aspects of God: Creator, Sustainer and Purifier, That is Waheguru.”

Guru Guru Waheguru Guru Ram Das Guru
This is a mantra of humility and great healing. It is an exclamation of the wisdom that comes as a servant of the Infinite and among the most well known of all Kundalini yoga mantras.

Founded in 1999 by world music composer, Lynne Holmes, Desert Rose is based in Cape Town and is widely regarded as leading composers, producers and performers of Universal Sacred World Music.

Lynne Holmes and Yusuf Ganief are at the heart of Desert Rose, constantly exploring the creation and emergence of universal world music that allows the listener to access their inner worlds, facilitating healing and shifting consciousness.

Lynne Holmes, (Music composer, Director, Pianist, and Keyboard/Harp player), is the winner of numerous awards including performing as a soloist with the National Symphony Orchestra for National Television at the age of 13. One of her performance highlights was composing and performing for Nelson Mandela in 1995. She has composed and produced 18 world music albums and received a 5 star rating for her album, ‘Silence of the Music’. She is recognized locally and internationally as the one of the leading composers of sacred world music. Her last 3 albums reflects her love for the Sikh traditions and teachings.

Yusuf Ganief, lead multilingual vocalist and group manager, was born from a mother with Scottish descent and a father with Javanese and Malaysian descent, but was brought up with the spiritual teachings and traditions of Sufism, passed on from generation to generation by his ancestors who were brought to SA in the 1600’s. At age 10 he joined a traditional Sufi group and became known in his community for his solo sacred recitals.

In 2008 Lynne recorded him as a soloist on the album, The Prayer. It became a local hit and gave birth to Desert Rose as a live performance group. Since then his personal universal spiritual path has developed into his role as a sacred multilingual vocalist singing in Sanskrit, Arabic, Hebrew, Aramaic, Hindi, French, Spanish and English.

Desert Rose has been internationally acknowledged as ambassadors for peace, non violence, interfaith and Climate Change awareness. They constantly strive to develop live performances, workshops and retreats to further their promotion of peace, social responsibility and common humanity through a unique universal musical signature. They follow a personal path of universal spirituality incorporating daily meditation, yoga, sacred chanting, veganism and promoting Oneness of the Supreme Creator and Creation.