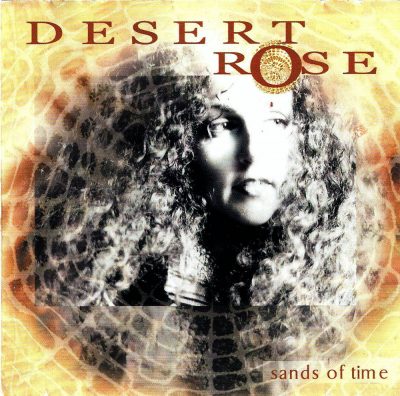 Lynne Holmes, founder of Desert Rose and leading world music composer successfully released her debut album; Sands of Time in Feb 2000.The album was released internationally from London and after 12 years is still regarded as a unique sound within the world music genre. The album is a unique world music interpretation of indigenous Khoisan culture and other indigenous cultures ranging from Hopi Indian, Asian to Tibetan melodies. The single, San Song reached no.3 on the top 20 in South Africa and remained on the charts for many months. The album was rated one of the top 20 albums in South Africa in 2001.

“I have been a musician and composer of my own songs for over 40 years and have attended thousands of live performances of every genre of music available to my ears. The music of Desert Rose is something of a new league to me. It reaches the innermost depths of your soul and you feel the raw emotion of what is going on in the music. I will only be happy when I have heard them perform in world class venues to massive crowds. The work they are doing to bring the world’s eclectic mix of people together through music is truly wonderful. I plan to do everything I can to ensure that next time they tour the UK they have a professional agent who paves the way for them to be a global phenomena. I would highly recommend anyone goes and hears their beautiful sounds.”

Jon Boys, Director, Inner Peace Centre For Conscious Living
Letchworth, UK. (June 2012)
Desert Rose is a unique group of musicians that is so needed in today’s world. The richness of their universal music awakens our original and innate qualities of goodness, peace, freedom of spirit, compassion and love for one Creator allowing us to overcome artificial barriers that divide humanity today.
I believe that Desert Rose with their professionalism and beauty of their voices will greatly help in any difficult negotiations such as talks about climatic changes and the future of our planet.

Their sacred and highly spiritual music will definitely help open many minds and hearts to higher truths and in a quiet and incognito way will guide them to better resolutions and decisions.

Desert Rose affords the listener with a distinctive juncture; that of delving into the profundity of the human psyche in order to experience the totality of the human mind, both conscious and unconscious. An immense soundscape provides even the most sagacious individuals with transcendent opportunities and rewarding clarity of cognizance, rich and nurturing from within.”

DESERT ROSE GROUP PROFILE
Desert Rose, founded in 1999 by world music composer, Lynne Holmes, is widely regarded today as one of the leading composers, producers and performers of Sacred World Music. In 2005 Lynne met with partner and lead vocalist, Yusuf Ganief, and in 2008 she produced and recorded him as an Arabic vocalist on their first sacred world music album, The Prayer. This debut album became CD of the year on VOC radio station, Cape Town and has since been internationally acknowledged in Turkey, UK, Malaysia, Poland, Singapore and India.

Desert Rose has to date composed and produced 12 CDs within the easy listening, world music and sacred world music genres. Since 2008 they have established themselves as the leading composers and performers of Sacred World Music in South Africa. They have specialized in composing indigenous Sufi music brought to the shores of South Africa in the late 1600’s by Yusuf’s ancestors from the Malay Archipelago which included Malaysia, Indonesia, Singapore, Philippines and East Timor. Yusuf is the lead singer for Desert Rose and is widely accepted as the leading Arabic vocalist in Southern Africa. In 2010 he was chosen to represent the Sufi faith communities in a national television programme (Southern Rhythms) on SABC alongside Pops Mohamed which highlighted South Africa’s diverse spiritual communities during the 2010 World Cup in South Africa.

Their album, Silence of the Music (September 2010), resulted in Desert Rose receiving a 5 star rating from mainstream media for Lynne’s musical integration of diverse cultural elements into a unique classical world music sound.

Desert Rose has featured and performed in South Africa at various major functions such as the Mandela Day at the Ubuntu Festival (2009), the annual Cape Town Festival on Human Rights Day (2009 & 2011), the Peace March Celebrations in St Georges Cathedral (1989) and the launch of the Charter of Compassion in Erin Hall with Archbishop Desmond Tutu (2010), the annual Indigenous Orchestra Ensemble at Artscape Theatre, Cape Town (2011) with Pops Mohamed, Dizu Plaatjies and other icons of African indigenous music, headliner act for the annual Spiritfest in Stellenbosch (2013), Reconciliation Day Celebrations in Greyton (2013) and will be doing the International Peace Day celebrations in Durban on 21 September 2014.

By invitation of the South African Faith Communities they performed in Warsaw, Poland at COP19 (9 to 23 November 2013) as part of the We Have Faith Campaign to address Climate Change through arts.

In March 2014 they performed to standing ovations at the Brahma Kumaris Spiritual University and Spiritual Centres in Mount Abu, Ahmedabad, Rajasthan and Delhi, India.

The core group of artists is made up of 4 artists adding extra vocalists and musicians as needed.

Yusuf Ganief, lead vocalist and group manager was involved in the business and arts world for more than 30 years before he embarked on a live performance career in 2007. He is currently the leading Arabic world music vocalist in Southern Africa. In 2010 he represented the Sufi communities of South Africa on the national television programme, Southern Rhythms. He has performed to standing ovations since 2012 to audiences in London, Oxford, Penang, Malaysia, Warsaw, Poland, Singapore and India.

Lynne Holmes, music composer, director, pianist, keyboard and harp player began studying the piano at age of six and at age 13 was chosen by the National Symphony Orchestra to perform a solo piano concerto for South African National Television. One of her performance highlights was composing and performing for Mr Mandela in 1995. She has composed and produced 12 world music albums and received a 5 star rating for her album, Silence of the Music. She is recognized locally as the leading composer of Sacred and Healing world music and internationally as one of the leading composers of universal crossover sacred world music.

Nceba Gongxeka, lead Xhosa Vocalist, multi instrumentalist, Mbira, African Harp, Mouth Bow, African Bow, Talking Drum and Pipe Flute was born in Langa, Cape Town, into a family of artists. He started music at the age of 8 and in 1997 join Dizu Plaatjies, composer and African Indigenous Music icon. Since then he has performed with African musical icons such as Sibongile Khumalo, Sylvia Mdunyelwa, Dj Warick, Amampondo, Pops Mohamed and many others. His exceptional musical talents have taken him all over the world since 2001 including Switzerland, Algeria, Canada, Argentina, Bangkok, Chile, USA, Belgium, Germany, Portugal/Spain, Eastern Block, Zanzibar, Oman, UK, Singapore and Malaysia.

In 2009 he joined Desert Rose as their African Vocalist and indigenous instrumentalist and in 2012 he was recorded on their album, Tariqat, and toured with them on their Sufi African Vibrations Tours to UK, Malaysia, Singapore and Poland in 2012/2013.

Sisonke Godlo, African percussionist, born in Langa, Cape Town, South Africa and was introduced to music at an early age, playing drums at the age of 6. In 2009 he joined the drumming group, Amaqhawe, and has at the tender age of 23 performed with African indigenous icons such as Abavuki and Dizu Plaatjies. He has regularly taught drumming at the University of Cape Town’s School of Music since 2010.