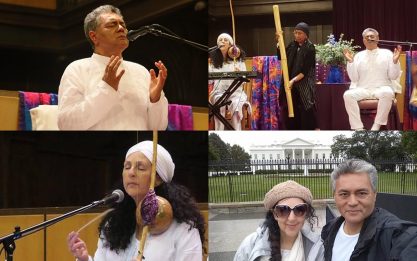 This tour was born out of a simple idea, ” America needs peace Ambassadors from the home of Mandela “. These were the words of human rights activist and founder of Women for Women, Zainab Salbi. Daughter of Saddam Hussein’s personal pilot, Zainab escaped the tyranny of Iraq at a young age and fled to America where she made a name for herself as an author and activist. Now, voted one of the top twenty influential women of the world, Zainab heard The Prayer playing in the background while visiting at the home of world renowned author, Alice Walker in California.

News of the ban on Muslims entering America from Zainab’s homeland, left Zainab feeling bereft. When she heard the music of Desert Rose, she vowed to organize a tour of the US with Alice Walker to help break down the stereotyping of Muslims in her country. Alice Walker, author of the blockbuster movie The Color Purple and Pulitzer Prize winner had her own reasons for bringing Desert Rose to the US. She created a healing space for victims of police violence which has reached unacceptable proportions in the US.  Together, these two powerful women led the way for this groundbreaking tour from the West Coast to the East Coast of the US.

The tour began on the West Coast in California. The first concert was organized by Reverend Dr. Liza Rankow of One life Institute in conjunction with Alice. The evening was titled ” Taking the arrow out of the heart”, the title of her latest book. Alice spoke of her journey of healing from the oppressor using Buddhist breathing techniques and at the same time honoring great people through her poetry. Great People such as Mohamed Ali who refused to fight in the Vietnam war. People who had overcome injustice and gross suffering whilst still maintaining the integrity of their own hearts. The music echoed this to a packed cathedral including mothers who had lost young children as a result of police violence. Emotions ran high as we ended with our gift from Africa, titled, Ubuntu, ” I am because of you ” We ended in a resounding high with the whole audience dancing to the beat of Ubuntu and the Mandela dance.  A huge success and a great story.

The following day we left for the Brahma Kumaris Centre in the heart of San Francisco. After a few concerts at the Centre and at private functions, we drove to the home of Alice Walker in Mendocino, California. During this time, we talked into the night, getting to know each other. All three of us were from juxtaposed backgrounds and worlds, yet we shared a soul connection and a love of the Divine. These few days left a lasting impression. It is not often that one gets to be in the company of an icon such as Alice Walker. With great humility we listened and learned.

Our next destination was Peace Village, the Brahma Kumaris retreat Centre in New York. We just happened to be there for their 40th anniversary of doing service in the US, and we had time before heading towards Manhattan for the rest of our New York leg of the tour. We spent a blissful weekend with soul family, Sister Mohini and Sister Jayanti, doing concerts each day at the retreat.

We arrived in Manhattan on the Monday with just one hour before being collected for a private concert in the home of philanthropist, Peggy Dulaney of Synergos. We shared the stage with Zainab Salbi who introduced us and led us into an interview and debate with guests. We ended this beautiful evening with Sacred Music, the sentiments were all the same, when we elevate ourselves through Sacred Sound, we go beyond our culture/religious background and experience a blissful moment of unity and greatness.

Settling into Manhattan, New York was quite an experience. It’s true, the big apple never sleeps. With crazy sirens going on all night, we experienced the culture of all-night shopping and socializing. Times Square, Madison square, Central Park, the Bronx, Brooklyn, Harlem, Carnegie Hall left us dazzled! After two weeks on this island we were feeling a bit of longing for the simple life.

Our next event with Zainab Salbi was at the Deepak Chopra home base. Zainab shared insights from her latest book ” Freedom is an inside job” and we used music to give the audience an experience of that inner world, singing from the heart. Her message was very humbling, as she shared her realizations that as an activist she had become something she did not like anymore, and she was turning the finger to point at herself. Self-realization is not an easy journey, it is much easier to fight the enemy outside rather than within. There were many celebrities in the audience, including Donna Karan of DKNY. The event was memorable, and we felt honored to be part of this.

The following day we performed in West End at the famous Cathedral Saint Paul and Saint Andrews. We shared the stage with author of Born with Wings, Daisy Khan. She shared a similar journey as a Muslim struggling to overcome the prejudice of religion and finding her voice in the “land of freedom. ” Meeting people and hearing their stories is always a heart opening experience. Providing sacred music with the purpose of experiencing unity and healing in a beautiful cathedral with a diverse audience is a great privilege that we value deeply.

Our last performance in New York City was at Middle Collegiate Church, a reformed Protestant Church on 2nd avenue. This church is renowned for its multicultural, multiethnic, and intergenerational policies. The spirit of love and acceptance is bouncing off the walls of this beautiful church. Zainab Salbi once again shared her journey of awakening and the tears flowed as we journeyed through Sacred Music and accessed souls’ consciousness.

We had the privilege of touring New York for a few days before we decided to travel by bus to Washington DC. There was something magical about sitting in the heart of New York, Time Square at 12 o’clock at night with looming sky scrapers around you all brightly lit up with ads and lights. One could really feel the pulse or heartbeat of this powerful movement called materialism. For a moment it was exciting!

We travelled to a cooler Washington DC to meet up once again with Alice Walker. This time we were performing at the famous Busboys and Poets venue, a chain of bookstores owned by well-known cultural activist, author and restaurateur,  Andy Shallal. But before this, we met up with the charming Brahma Kumaris family in Washington and shared our music at the Meditation Museum. It’s always interesting to see how each spiritual centre delivers the same message in different and innovative ways. Geared more towards influence makers, celebrities and politicians, we were impressed with the level of service achieved by this small group of powerful souls in the heart of Washington.

Busboys and Poets, named after Langston Hughes, who rose to fame as a poet while working as a busboy was a heartwarming experience. People were queuing outside the venue; the atmosphere was electric, and the audience did not miss a beat. It’s not often that an icon such as Alice Walker makes an appearance. Alice joined us on stage playing the rain stick during the performance of our Rain Chant in N|uu. Magical it was, from different worlds, we united in the language of the Ancients and the audience, as packed as it was, went into silence and reverence. A very poignant moment this was and also our last concert in the US.

We bid farewell to Alice, Andy, BK Dr Jenna and began our journey back home. The US tour was mind expanding in so many ways. We experienced a society so divided and tormented, with such a strong sense of identification with politics and their country. Coming from South Africa where we experience political divide and chaos at the best of times and have learnt not to identify with this, but rather go beyond, it was curious. Nevertheless, our gratitude was abounding and our desire to spread the message of sacredness and soul consciousness remains stronger than ever.

[siteorigin_widget class=”SiteOrigin_Widget_Video_Widget”][/siteorigin_widget]
0 Likes
Notice: Undefined offset: 0 in /usr/www/users/deserykqnd/wp-content/themes/dfd-native/inc/loop/posts/post_single.php on line 279 Notice: Trying to get property 'slug' of non-object in /usr/www/users/deserykqnd/wp-content/themes/dfd-native/inc/loop/posts/post_single.php on line 279