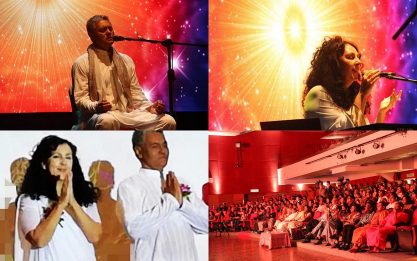 Our latest tour of Malaysia was simply sublime! It was our fourth performance in South East Asia, twice for the Georgetown festival and once for the Tapestry of Sacred Music Festival  in Singapore. This was special because it was organized by the Brahma Kumaris.

When the Brahma Kumaris invite you on tour, they pull out all the stops and give you royal treatment. From start to finish the finest detail is attended to. We arrived a few days early to adjust to the time zone before flying to each destination. It’s always an opportunity to become spiritually charged when staying in an ashram. 4.am meditation, spiritual class, beautiful people and of course food that is prepared with mindfulness, love and pure thought. Whilst we take care to do all of these practices at home, it's so much more powerful together with other powerful yogis. The Asian Retreat Centre is huge and serves the whole of China and South East Asia providing accommodation for hundreds of people at one time.

The theme of our tour was Unity in Diversity.  This was expressed through a Sacred Music journey combined with a cosmic splash light show by the Dreamworks light animator, Vinay Hedge. The collaboration had a lot of potential, as we sang, Vinay created images with cosmic splash that reflected the music visually. The idea was to give the audience an experience of unity through cutting edge art.

Malaysia is a diverse culture of Indian, Muslim Malays and Chinese communities. Each province is mixed with one of the cultures being more dominant. Our first performance was in the South of Malaysia, Johor with a higher ratio of Indian population. The energy was very high at the event and we performed to a standing ovation and a full house of about six hundred people. We loved the Brahma Kumaris family in Johor, our time together was very short but very sweet.

We flew the following day back to Kuala Lumpur, going straight to the venue, The Temple of Fine Arts. The following night’s performance was packed with dignitaries and diplomats. The Brahma Kumaris provide an interface for inter-religious and inter-political dialogue and interaction. Once again, we performed to a full house and standing ovation. There were moments where we all melted into one, all on different paths yet heading for the same destination. For a moment, time stopped and regardless of religious orientation, we shared the experience of consciousness. We loved Kuala Lumpur, clean where the hotel was, modern and artistic with clever designs.

The following day we flew to the Island of Penang. This is a familiar place for us, as we have performed at the Georgetown Festival twice. We enjoyed seeing old friends and familiar faces. Once again, we headed straight to the venue, the auditorium at the Wawasan University. Overlooking the sea, this grand University used to be the Yeap family heritage homestead. Yeap Chor Ee was a business tycoon and philanthropist. He donated this palace to become the first private university in Penang.

Once again, the event was highly successful. The population of Penang has a large Chinese contingent and had been strained politically for the last few years. Politicians met up and spoke for the first time at the event and the current government pledged financial assistance for more events like these in the future. Emotions ran high, and our rain chant was especially well received. By this stage we were on a spiritual high and running on very little sleep. The following day we did some shopping at the local markets before we gave our final performance at the official Brahma Kumaris Center with Sister Helen. We led people into deep meditation through a sound journey. Sometimes after a sound journey like this we go into such deep silence it's difficult to speak, however we gave drishdi and toli (blessed Indian sweets) to everyone who participated.

Early the following morning we met for spiritual class and flew out of Penang back to KL, homeward bound. We left Malaysia loaded with spiritual blessing, gifts and full hearts.