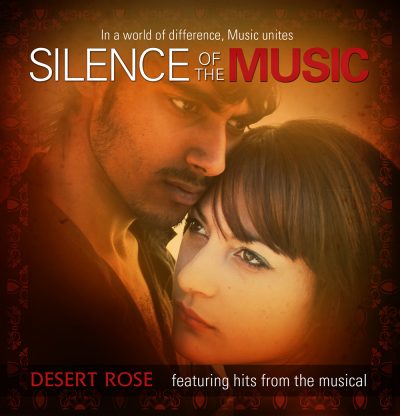 Silence of the Music

Silence of Music is a fusion of multilingual world music with some of the best spiritual vocalists in Africa in an award winning musical. Languages include Arabic, Hebrew, Latin, Xhosa, Hindi, English and Latin. A cultural audio feast

Silence of the Music, a musical about intercultural love between Muslim and Christian, was premiered on 23 Sep 2010 at the Baxter Theatre to standing ovations every night. Mainstream media and audiences gave the originally composed music a 5 star rating describing it as a cultural crossover masterpiece, uplifting and ground breaking. The music has swept audiences away with its soaring themes as east meets west with strings and Tabla, Spanish guitar and African rhythms. Described as a musical journey the diverse music caters for the classical lover as well as the indigenous and popular music lovers, ranging from classical Opera and haunting Gregorian chants to the soulful bliss of a Sufi prayer accompanied by Flamenco guitar and Indian Tabla.

“It has a vibe that can only be described as euphorically multicultural; quite unlike anything I have experienced in a show in quite some time.”, Peter Tromp. Review in Next 48 Hours, 7 Oct 2010

“There is no doubt – this work is bold. And we are always in need of new, exciting material on our stages. What makes this particular production stimulating is undoubtedly its accessible music.” Rafiek Mammon, Cape Times, 29 Sep 2010.

“I commend and support the social initiative by Desert Rose to address the issues of religious intolerance and cultural prejudice though their musical drama, Silence of the Music. Their ongoing perseverance to create music for the purposes of promoting common spirituality in the face of growing extremism, Xenophobia and declining spirituality is much needed and should be supported by everyone who cares about establishing a society of healing and peaceful co-existence.”…..ARCHBISHOP DESMOND TUTU.

“The key difference between Desert Rose and many others who try to do the same thing is that Desert Rose does it very well.” Ryland Fisher, Chairperson of the Cape Town Festival. Published in the Next 48 Hours, 7 Oct 2010.

“I would like to convey our appreciation for Silence of the Music as an innovative and ground breaking social arts initiative to address issues of identity and cultural diversity. I would strongly recommend support for this show so that it can be seen nationally in view of its social relevance and promotion of tolerance and dialogue amongst our diverse communities in South Africa.” Councillor Grant Pascoe, Mayoral Committee Member for Social Development, City of Cape Town.

“Silence of the Music epitomizes the huge talent prevalent on the local music and arts scene.” Calvyn Gilfellan, CEO of Cape Town Routes Unlimited
“This is the most brilliant event I have attended in ages – stunning fusion of music, sensitive love story and generally so uplifting….I am going again – and everyone else should go not once but many more times.” Mercia Davids, The Community Chest of the Western Cape.
“I loved your show today! Bought the CD. Have booked to see it again on the 30th. Beautiful, inspiring message, and oh that music!”, Monica Cromhout, SA’s leading Astrologer

“The entire cast: Muslim, Christian, Hindu, Jewish and Sangoma all stood us proud and deserved their standing ovation. May that ovation and the message of “Silence of the Music” continue to resound around the world, and not fall on deaf ears – especially where it is most needed” Shaykh Seraj Hendricks, Islamic Lecturer, Scholar and Imam – University of Johannesburg and Al Azavia Mosque

But all these things said, with instrument, voice and dance at its centre, Silence of the Music does an entertaining and lavishly produced job of suggesting that music is the universal language that will overcome all odds…Kavish Chetty, The Argus 19 April 2011

The music, especially the harmonious mixture of genres and cultural modes of expression, remains ‘Silence of the Music’s’ biggest draw card…, Peter Tromp, Next 48 Hours 21 April 2011

The show transcends the visual into the realm of aural bliss. And as it celebrates difference and invokes glorious mutation it reminds us of the opulence of our cultural wealth…. review by Dex Goodman of WhatsonSA, 15 April 2011
With its witty lyrics, catchy tunes and soaring melodies, Silence of the Music could well be a South African broadway extravaganza….review by Dex Goodman of WhatsonSA, 15 April 2011